From Grotius to Zegveld: 400 years of right to plunder

From Grotius to Zegveld: 400 years of right to plunder

[A Dutch version of this article was submitted to De Groene Amsterdammer, Vrij Nederland, Trouw and Vers Beton, however, none of these Dutch media platforms wanted to publish this piece.]

The neutrality of the International Criminal Court (ICC) was criticized after United States President Donald Trump imposed financial sanctions and travel restrictions in June on those who assist the court in investigating crimes committed by the US and its allies. The world was shocked and stunned.

Responding to the furor, three Dutch Christian politicians from the conservative SGP penned an opinion piece that was published in Dutch newspaper Trouw. The three men argued that countries such as the US, the United Kingdom and Israel had reliable legal systems that made the ICC unnecessary. They went so far as to state that the values for which the ICC stood were anchored in Dutch culture.

But what is this culture, taking into account 400 years of looting and plundering? The Netherlands’ long colonial history shows that the law has often functioned as a license to plunder. In the former East Indies, now Indonesia, the Dutch even implemented a three-tiered system of apartheid that legally discriminated groups of people based on race.

The series of lawsuits the Dutch Debts of Honor Committee (K.U.K.B.) has filed since 2008 against the Dutch government for atrocities against Indonesians reveal that the civil court in The Hague has failed to reach a fair, just and above all, a non-colonial judgment.

A closer look at the verdicts shows that all levels of the Dutch legal system justify colonialism. While the civil court has condemned the Dutch state for cases of “excessive violence”, the rulings are based on a colonial standard that mirrors Trump’s rejection of legally prosecuting his country for war crimes. This double standard is rooted in Western European colonial thinking that goes back to the 17th century.

However historical and courageous their legal course, which has restored Dutch war crimes on the judiciary’s agenda, the process remains extremely colonial. 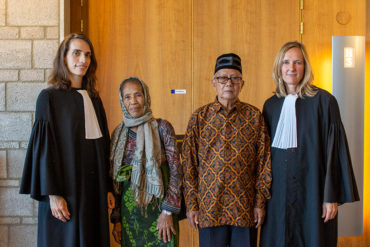 On March 25, 2020 the civil court in The Hague convicted the Dutch state for war crimes committed in South Sulawesi in 1947, but many of the plaintiffs’ claims were rejected for lack of evidence. Of the claims that were accepted, the lowest figure that the Dutch government was ordered to pay as compensation was 123.48 euro (US$146.63).

The core problem is that the Dutch state, the civil court in The Hague and the lawyers from Amsterdam all talk about “legitimate combat actions” versus “war crimes”. Only acts of violence that fall outside the law of war have a chance at resulting in a conviction. This is the colonial principle that distinguishes “extreme” violence that as unacceptable and “ordinary” acts of war as acceptable.

On this basis, the summary execution of Indonesian civilians and prisoner abuse are deemed war crimes while the Dutch colonial presence in Indonesia is seen as legitimate. This means that, in their eyes, it is completely legal for a Dutch soldier to shoot dead an Indonesian who bore arms against the Netherlands’ attempted reoccupation of Indonesia in the late 1940s. This line of thinking occurs outside the courtroom too, for example the Dutch government-sponsored study “Independence, Decolonization, Violence and War in Indonesia, 1945-1950” is equally based on the colonial concept of “extreme violence.” When Dutch King Willem-Alexander offered Indonesia apologies he did not apologize for the colonial war as such, he only apologized for “extreme violence.”

The relatives of the Indonesians who resisted Dutch occupation thus have no chance at justice when they knock on the door of the Amsterdam law firm. It seems that neither Zegveld nor Vossenberg consider the reoccupation of Indonesia as conflicting with international laws. At the very least, they uncritically follow Dutch colonial law.

Further, the Indonesian plaintiffs suing the Dutch state were not acknowledged as Indonesian citizens until Dec. 27, 1949, so in court, they are told that their fathers and husbands were Dutch subjects at the time they were murdered.

Ultimately, the crux of the issue is the question that Pondaag raises again and again: “Who gave the Netherlands the right to deem an area 18,000 kilometers away [as] colonial property?”

More than 400 years ago in 1609, the pamphlet “Mare liberum” (The Free Sea) was published as the first steps were being taken to build an overseas Dutch empire. Seven years after the Dutch East India Company (VOC) was founded, Hugo Grotius wrote a fiery speech about “the right of the Dutch to trade in the East Indies”. It was an indictment against the Spanish and Portuguese colonial powers that had established themselves as “rulers” in the Indonesian archipelago a century earlier.

Grotius’ claim exposes the enormous hypocrisy of the Netherlands. Many of the arguments he uses (in which he portrays the Spaniards and Portuguese as unjust occupiers of “the Indies”) also apply to the Dutch occupation that followed. Meanwhile, the way Grotius writes about human rights does not differ much from contemporary thought.

The pamphlet eliminates the oft-repeated argument that we should view colonial atrocities “in the context of that time”. “Mare liberum” was published just before Jan Pieterszoon Coen destroyed the original port town of Jacatra (then Jayakarta, now Jakarta) and massacred the people of the Banda Islands.

International law contains an imaginary line of demarcation that still divides the world in two between colonizers and the colonized. Simply put, a crime committed by a Western European power is rarely brought to the international court in The Hague, as long as it concerns harm against a non-Western power. Until today, what (former) colonized peoples experienced under occupation by Western powers does not stand a chance at gaining at the ICC in The Hague.

Ever since our current world order emerged, a jurisdictional distinction has been made between Europe and what is deemed a lawful act against non-white people elsewhere in the world. For example, Coen’s atrocities were morally condemned over the centuries, with a number of Dutch people saying that he “went too far” in massacring the Bandanese in 1621; yet the genocide was generally accepted as a “necessary” evil for the VOC to gain monopoly over the nutmeg trade. At most, it was noted that the occupation could possibly have been less violent.

The way in which Zegveld discusses Dutch war crimes in Indonesia carries echoes of Grotius’ stance. Although the two acknowledge that human rights are universal and should thus apply to everyone in the world, they do not oppose their country occupying the lands of other peoples. On the contrary, they use their legal knowledge to avoid discussing the legitimacy of the Dutch colonial occupation, thereby sustaining the colonial approach in the Netherlands judiciary.
—