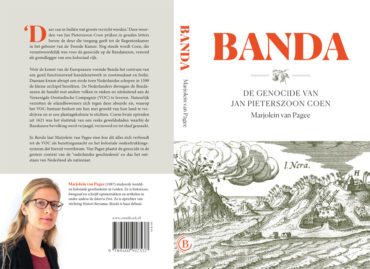 ‘Daer can in Indiën wat groots verricht worden’ [Something magnificent can be done in the Indies]. These words of Jan Pieterszoon Coen are written in gold at the entrance of the Regentenkamer [Room of the Regents] in the building of the Dutch government in The Hague. Coen was responsible for the genocide on the Bandanese, yet in the Netherlands he is still honored as the founder of the Dutch colonial empire.

Before the arrival of the Europeans, Banda was the center of a well-functioning trade network in nutmeg and mace. This came to an abrupt end when Dutch ships reached the small archipelago in 1599. The Dutch forced the Bandanese to cease trade with other peoples and were only allowed to exclusively sell their nutmeg to the Dutch East India Company (VOC). Naturally, the islanders opposed this absurd order, upon which the leadership of the VOC decided to forcibly drive out the Bandanese from their land. Subsequently a plantation colony was established. Coen’s brutal act of 1621 was the culmination of twenty years of violence in which the people of Banda were expelled, murdered and enslaved.

In Banda Marjolein van Pagee shows how this relates to the VOC as an occupying force and the colonial apartheidssystem that was created centuries later. Van Pagee positions the genocide in the larger context of Dutch national history and the emergence of the Netherlands as a nation state.
—
Francisca Pattipilohy wrote the preface.