Why this is not a ‘mea culpa’ (acknowledgment of guilt) 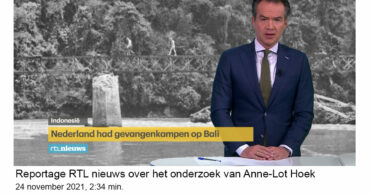 Many Dutch media outlets are covering the recent book publication of historian Anne-Lot Hoek: ‘De strijd om Bali’ (The Struggle for Bali). Part of her research was financed by the Dutch government-sponsored study on 1945-1949.

For outsiders this TV-report of RTL-4 may appear as if the Dutch acknowledge their own wrongdoing. But this is not the case. In fact this is nothing more than misleading government propaganda, preparing the Dutch audience for the results of the 1945-1949-research that will be published in February 2022. At this point in history the Dutch general opinion is that: ‘yeah, we did bad things in Indonesia’, usually followed by: ‘well, it is a long time ago, we have to see this in the context of that time’, and also ‘there were wrongdoings on both sides, Indonesian anti-colonial violence was horrible too.’

The recent attention for Dutch atrocities in Indonesia also feeds the image of self-critical, progressive people, who are taking responsibility for what happened in the past, again, a schoolbook example for other nations. This ties in with the Dutch national myth of being tolerant and democratic people.

The impression of this TV-report is misleading, Dutch people do not feel guilt, there is no realization that they’re part of a colonial empire that oppressed other nations for hundreds of years.

These kind of TV-reports do not change that. They talk as if it is surprising that violence took place! But what do you expect when you occupy other people’s land? Colonialism is always violent! Whether it is physical or mental violence, violent it is.

As I explained in my previous post, the truth is that it was an Indonesian man, Jeffry Pondaag, who put the topic of Dutch warcrimes on the Dutch agenda again. It is because of his efforts and the ongoing court cases against the Dutch state, that 3 Dutch institutions (NIMH, NIOD, KITLV) in 2012 felt the urge to call for a large-scale investigation into the Indonesian war of independence. In all these years they hadn’t done that. Historian Anne-Lot Hoek joined this investigation, she received money. Although she generally acknowledges that the court cases by KUKB are important, she refuses to draw any link between the government-sponsored research, the systematic exclusion of Jeffry Pondaag and the ongoing claims. Let alone that she wants to discuss her own participation in this research.

Apart from this TV-report, all other articles on Anne-Lot Hoek’s Bali-book announce the publication of the research results in February.

What I found remarkable too is the presentation of ‘good colonist’ Siebe Lijftogt, a Dutch colonial official who worked on Bali in 1946. Comparable to the way Multatuli is framed, Lijftogt is presented as a critical individual who dared to speak up against violence. And oh, poor man, he was even called a traitor by his fellow-Dutch! But although Lijftogt may have condemned violence, he did not condemn colonialism. After all he himself worked for the colonial regime and thus contributed to the colonial re-occupation as well. That is why condemning violence is meaningless if you do not question the colonial system as such. Colonial violence comes in many forms!

Whether Anne-Lot Hoek realizes it or not, she exactly meets the demands of the Dutch government. Just like they embraced Rémy Limpach before (Dutch government historian working for the Dutch Ministry of Defense) they are now embracing her too.
— 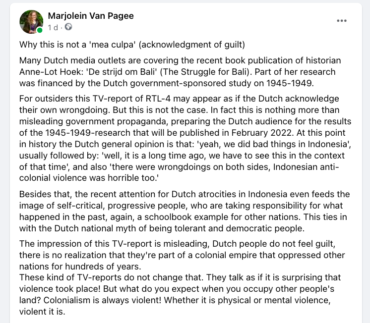