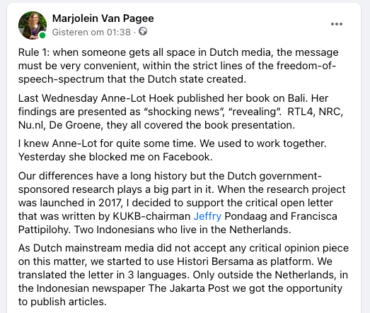 Rule 1: when someone gets all space in Dutch media, the message must be very convenient, within the strict lines of the freedom-of-speech-spectrum that the Dutch state created.

I knew Anne-Lot for quite some time. We used to work together. Yesterday she blocked me on Facebook.

Our differences have a long history but the Dutch government-sponsored research plays a big part in it. When the research project was launched in 2017, I decided to support the critical open letter that was written by KUKB-chairman Jeffry Pondaag and Francisca Pattipilohy. Two Indonesians who live in the Netherlands.

As Dutch mainstream media did not accept any critical opinion piece on this matter, we started to use Histori Bersama as platform. We translated the letter in 3 languages. Only outside the Netherlands, in the Indonesian newspaper The Jakarta Post we got the opportunity to publish articles.

At that critical moment in 2017, Anne-Lot Hoek did not sign the letter, she joined the research team instead. I know that this meant: a paid job. Something that she wanted so badly after years of working as freelancer. (I know how it feels!)

I remember that when I saw her at some occasion, she told me that she felt personally attacked by the letter and our efforts to raise the issue. She said that she actually agreed with some of the points but she saw no reason to quit and leave the project to join the group of critics. She thought she could change the project “from within.”

But Anne-Lot, choices have consequences. The consequence of my choice was that I didn’t get a paid job within my field. I could have worked at Leiden University, at KITLV, at NIOD etc. These people avoid me now, it is considered risky to criticize ‘big shots’ like Oostindie, the head of KITLV.

The consequence of Anne-Lot Hoek’s choice is that she enjoyed the financial benefits that came with joining the research team. In contrast to the critics of the study, her articles got published. She never experienced censorship, she probably thinks that such thing does not exist in the Netherlands. But another consequence is that her choice put herself on the wrong side of history.

Her position is quite similar to Dutch historian Cees Fasseur who worked for the government in 1969 and compiled the ‘Excessennota’ (List of Excesses.) Hoek and colleagues generally label this ‘Excessennota’ as a piece of propaganda. They admire Dutch veteran and whistleblower Joop Hueting for his confessions on Dutch television. It was only after his revelations about war crimes that the government decided that they had to do something to pretend they were taking responsibility. That is when the government hired Cees Fasseur to work on a list of excesses. Case closed, the government thought. (And it actually seemed to work for quite some time!)

But the case was not closed. An Indonesian man, named Jeffry Pondaag, arrived in the Netherlands in the same year that Hueting made his confessions. At that time Pondaag was still a young man, 16 years old. But it was through him, after years of silence, that the topic of Dutch war crimes was put on the agenda again. His efforts to bring Indonesian relatives of executed civilians to the Dutch court in The Hague are crucial.

Clearly, the ongoing court cases by the K.U.K.B. foundation frustrated the Dutch government. Just like in 1969, they felt that something needed to be done in order to save their face. That is how they decided to fund this large-scale investigation that involves 4.1 million euros tax payers money. Dutch academics and journalists were ready to help them.

Anne-Lot does not want to see all this, she does not acknowledge this direct link between the court cases and the funding of her job within the research project. Yet, she also does not want to be compared to Cees Fasseur. She wants to be liked and praised for being ‘progressive’ and ‘self-critical’.

This is impossible. Choices always have consequences. After reading the open letter in 2017, she could have made the right choice and quit the project and join the critics.

Like many other Dutch researchers she often says that it is about time that the Dutch should start “listening to Indonesians.” But why then, Anne-Lot, are you ignoring and silencing Pondaag and Pattipilohy’s voice when they criticize the research project in which you took part and that helped you to finish your research?

You are taking up space in Dutch media that these two Indonesians do not get. You can tell a thousand times how “important Jeffry Pondaag is for you”, it does not undo your choice to let him down at a crucial moment.

In February the Dutch researchers will present their findings. I am more than ready to analyze your books, your articles, everything. Bring it on! This time the Dutch government will not get away with this. 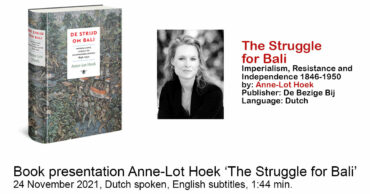 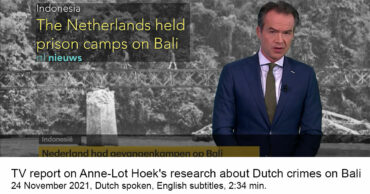