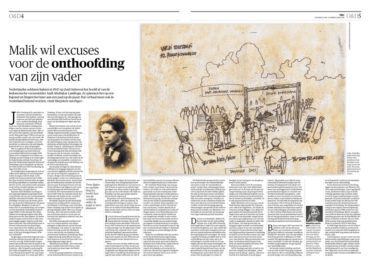 MALIK WANTS APOLOGIES FOR THE BEHEADING OF HIS FATHER

In 1947 on South Sulawesi Dutch soldiers severed the head of the Indonesian opposition leader Andi Abubakar Lambogo. They impaled the head on a bayonet and later hung it on a stake at the market. This story should be known in the Netherlands too, says Marjolein van Pagee.

About half a year ago Jeffry Pondaag (63), founder and chairman of the Committee of Dutch Debts of Honour, received an email from Enrekang, South Sulawesi, Indonesia: if he could help the son of Andi Abubakar Lambogo with starting a lawsuit against the Dutch state. His father was a captain of the Indonesian Army (TNI) in 1947 and died in a horrible way. The family contributes numerous of sources, Indonesian military records, newspaper articles, memoirs of a brigadier general and there are also witnesses.

What happened? Several Indonesian forces in South Sulawesi (formerly Celebes) meet in early 1947 to improve cooperation in the struggle against the Dutch military occupation. The notorious Dutch captain Raymond Westerling arrived in this area from December 1946 to February 1947 and quelled the fierce resistance with force.

The military units regroup and want to continue their struggle through sabotage and surprise attacks, according to an Indonesian newspaper from 1987. The plan had the intention to boost the moral of their own people as well, to make clear that the resistance, even after the cruel actions and numerous summary executions by Westerling, was not yet broken.

Captain Andi Abubakar Lambogo is a regionally known and respected opposition leader, member of a prominent aristocratic Muslim family. (The name Abubakar refers to the first successor of the Prophet Muhammad.) On March 13, 1947 the group of Abubakar, Battalion I, is ambushed by troops of the Royal Dutch East Indies Army (KNIL) in the village of Salu Wajo. During the heavy fighting Abubakar got wounded in his thigh, the Dutch troops take him and his men as prisoners. Then Abubakar was beheaded. The beheading, which is referred to in various Indonesian sources, but does not mention in which way exactly his life was ended. Did they shot him first? Or did they directly behead him?

The witnesses and the descriptions in the Indonesian military sources agree on the following happenings. Dutch troops take the head to the market in the larger town Enrekang, seven kilometres away. “The body was left behind on the road in Salu Wajo,” explains Ms. Puang Kuneng (87) who still lives in Enrekang via email to Jeffry Pondaag. She still remembers that day vividly; she was a girl of eighteen years old when it happened. Also Mr. Bachtiar (86) witnessed the head at the market of Enrekang with his own eyes.

Both remember also the person responsible for the area, the Dutch commander in Enrekang district, captain Gerardus August Blume, whose name is sometimes spelled as Bloumen or Bloemen in the Indonesian sources. They estimate that he must have been around thirty years old in that time. Dutch records confirm that he is was 32 years then. “He wore a uniform and had a white skin,” recalls Ms. Kuneng. Though they have not seen who carried out the execution, they keep Blume responsible because he was the captain. The same suggestion is made by the former, and now deceased, Indonesian TNI Brigadier General Oddang in his memoirs. 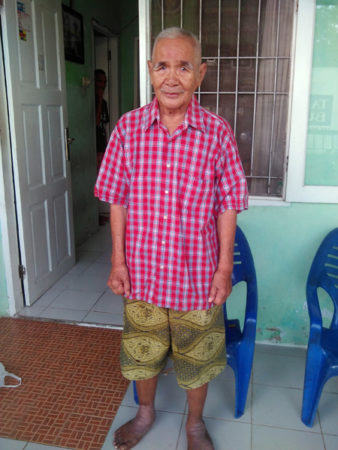 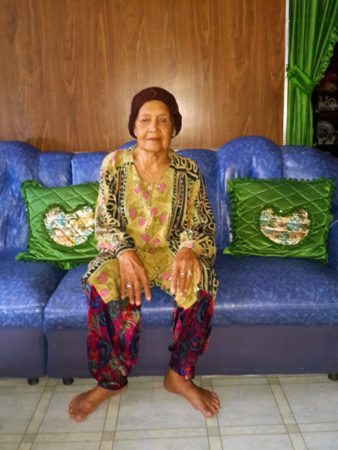 At the market Dutch soldiers force the prisoners of war to, one by one, kiss the severed head of their leader that is impaled on a bayonet. Citizens who went to the market in Enrekang, including Kuneng and Bachtiar are spectators. After that the Dutch soldiers hung his head on a stake. Kuneng remembers that the head was there for two days and one night to set an example. The Indonesian newspaper article from 1987 concludes that the Dutch did this to the “to decrease the fighting spirit among the youth.”

Eventually the family was allowed to take the head to bury it along with the body in Enrekang where Andi Abubakar Lambogo still has an honorary grave at the cemetery. Ms. Puang Kuneng: “The people lost a leader, there was anger and resentment when we heard that Abubakar was beheaded, it was inhumane.”

KNIL must have known who they were dealing with; not only did they commit corpse desecration of the body of Abubakar, they also set his house on fire. Kuneng says that Abubakars wife, with whom he had four children, protested to Blume in Enrekang. But according to Kuneng, Blume did not listen to her, and even imprisoned her for several days. Abubakars son Malik: “We were all terribly sad and angry, but what we could do against the Dutch army?”

Both the witnesses Kuneng and Bachtiar, as the Indonesian sources point out that the Netherlands has committed a war crime here in accordance with the Geneva Convention by executing Abubakar and dishonouring his body while he was a prisoner. But because there are no witnesses of the confrontation it still remains unclear who exactly committed this horrific act.

They speak of a barbaric act and murder. Bachtiar: “It was sadism. They attempted to sow fear. This event was the reason for me to join the Indonesian army later to continue the fight and defend my country. ”

In South Sulawesi, between December 1946 and February 1947, the infamous captain Raymond Westerling and his ‘Depot Speciale Troepen’ was given a mandate by the Dutch military leadership to crush the uprising on the basis of a State of war- declaration. This authorization was called ‘emergency jurisdiction’ which meant that the Dutch military authorities gave Westerling and some of his officers permission to executed without trial.

Blume was one of them, according to a research report from 1954 by two lawyers Stam and van Rij. Although soon Blume lost this authorization again, the Dutch authorities expanded to other officers. It is not clear why and when Blume was deprived of this power exactly.

The ‘Westerling method’ was aimed to break the opposition at all costs. This led to many euphemistically called ‘excesses’ by which estimated thousands of people were executed. The aim was to alienate the locals from the Indonesian authority, which was only seen as a few insurgents. In addition to public executions, torture and burning of houses sometimes also beheadings were taking place to set an example. There is this rumour about Westerling that he kept the head of a dead warrior in a trashcan next to his desk and pulled it out to force another prisoner to cooperate. And historian Gert Oostindie, in his recently published book ‘Soldier in Indonesia,’ also reported beheadings as desecration of the corpse.

After the atrocities were known, both the Dutch army command, the (temporary) Dutch colonial authorities and the Attorney General in Batavia, decided in 1948 to start a research led by Mr. K.L.J. Enthoven, in which the crimes are described in detail. Although the report has been presented to the Dutch government of Drees, no actions were taken afterwards.

In fact the Dutch authorities knew about the summary executions and by the ‘emergency jurisdiction’ it was even legitimized. Also described by historian William IJzereef in his book ‘The South Sulawesi affair’. The summary executions even continued after Westerling left the area in February 1947. Numbers from the research by Enthoven show that it happened until July 1947 without any intervention of the Dutch authorities. Derailments of violence as the beheading of the body of Abubakar took place in a time when the Dutch colonial authorities turned a blind eye in South Sulawesi. 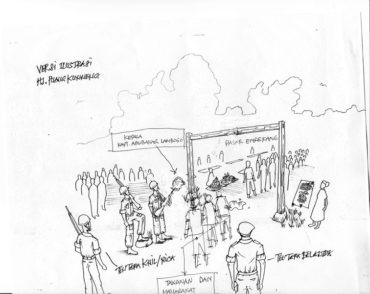 Sketch from the situation at the market in Enrekang

The son of Abubakar Malik (72), who was at the time of the beheading five years old, contacted Jeffry Pondaag after he has read in the local newspaper about several lawsuits that were won by the Committee, after which a dozen widows has received compensation. The first question Pondaag asked Malik is whether the beheading of his father is mentioned in descriptions and whether there are witnesses who can confirm this. The chairman of the Committee knows that lawyer Liesbeth Zegveld has more chance of success if there is something written on paper. Pondaag comes up with the idea to send an illustrator to the witnesses, so he can make a sketch of the event.

Grandson Ricky is responsible for the correspondence by mail because his father Malik has no Internet. Besides the testimonies, Pondaag receives in the course of the past months several copies of Indonesian books and newspaper articles that mention the murder of Abubakar. There is even a portrait from 1940.

Malik Abubakar now wants an apology from the Dutch government to the Indonesian people in general: “I want to held them accountable for these acts committed during the colonial period which are in contrary to the Geneva Convention,” but in particular he asks for apology and reparation for what was done to his father. Grandson Ricky Malik (55 years): “If my grandfather as a prisoner was treated humane, he would still be alive. He could have served as a captain in the army; he would have been appreciated in Enrekang and could have contributed to his country. His death was a huge shock to our family. My grandmother with her four children had no home and had to live with relatives. It has marked their lives.”

Jeffry Pondaag says not to be surprised by the story of Abubakar. “I knew these things already,” he says. “I heard about this in Indonesia already in elementary school.” He grew up in Jakarta but moved in 1969 as a 16-year-old teenager to The Netherlands. Pondaag has always been interested in history and could not accept the Dutch interpretation of the history because it is very different from what he had learned in Indonesia. “Here they were talking about terrorists and extremists and they said that Sukarno was a collaborator. While even the soap operas that I saw in the 50s and 60s on Indonesian television, re-enacted how Dutch soldiers inflict massacres and carried out beheadings like this. It is time that the Netherlands hear about the Indonesian side of history.” He does not want to generalize, but is of the opinion that the Netherlands as a country must drastically rewrite history.

In 1947 Blume twice received, the Military Order of the ‘Bronzen Kruis’, on the recommendation of the temporary autorithies in Batavia for “courageous and prudent perform.” One of his actions was a fight in Makassar in 1946 where he personally “put down some terrorists” with many “dead, wounded and prisoners on the enemy side.”

The second award was just approved by Batavia before the action in Salu Wojo. It is unclear whether Blume was already aware of the approval and felt perhaps strengthened in his actions at the time of the beheading.

The National Archives in The Hague keeps the documents about Blume’s military medals, classified type A, which means they are only fully public in 2028, only under the supervision notes can be made. Blume’s record in the archives shows that he was appointed as detachment commander in Enrekang in 1941. After his captivity in a Japanese internment camp, he was again commander in Enrekang in January 1946. Blume was born in 1915 in Batavia and got his military education at the Royal Military Academy in Breda. He was stationed in South Sulawesi since 1939. Blume died in The Hague in 1972.

In 1958 the Indonesian President Sukarno posthumously awarded Abubakar with the honorary title of national hero, his story still lives on the Indonesian side. Two captains, one fought for the Indonesian National Army and the other for the Netherlands at the Dutch colonial army, they were both in their early thirties and both eventually honoured for their courageous deeds. But only one of the two is beheaded, under the responsibility of the other.