In August 1947 Dutch marines killed about 400-600 [Indonesian] freedom fighters and dumped the bodies in a mass grave. Self-defense according to the Marines. A reconstruction.

NRC, August 15, 2014, Text: Anne-Lot Hoek, Research & Photography: Marjolein van Pagee
(With special thanks to Aftonun Nuha and Ady Setyawan for their support in conducting the research)

Pamekasan, Madura. Documentary photographer Marjolein van Pagee, who is doing research about the actions of the [Dutch] Marines in East Java, stands on the same place where in 1947 400-600 Indonesian freedom fighters were killed, just in front of the great Syuhada Mosque on the aloon-aloon (central square). Except a small monument with the inscription „to those who were once buried here” nothing reminds of the confrontation between Dutch soldiers and [Indonesian] freedom fighters during the Indonesian independence war. On Madura van Pagee talks with witnesses of the tragedy to get a more detailed image about what happened in the night of Friday 15 on Saturday 16 August 1947. 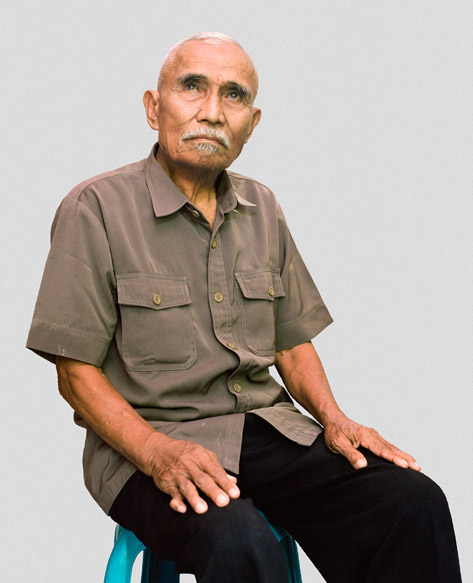 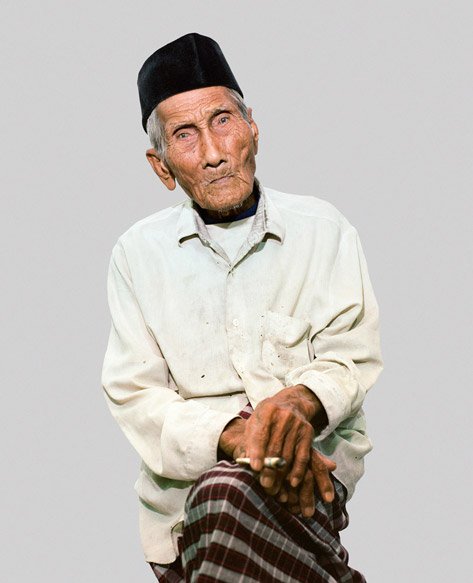 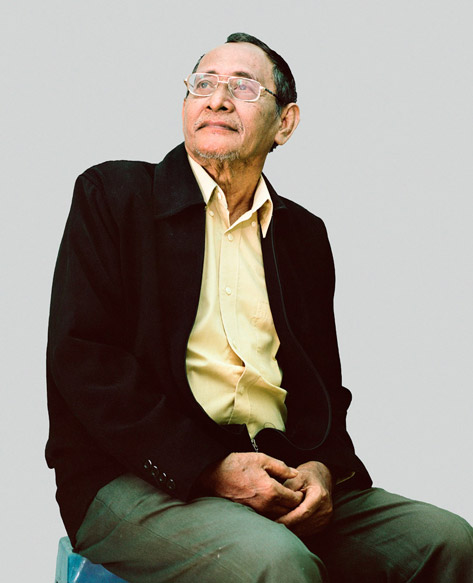 Veteran H. Abdul Halik (1929) still remembers the attack on the Dutch very clear. „Our fighters started to scream ‘Allah Akbar’ when they entered the town,”he explains in the front-room of his home not far from the central square in Pamekasan. This wasn’t smart because it warned the Marines post at the city border. Around three o’clock in the morning the Marines opened fire on thousands Muslim fighters who attacked them with bamboo spears, swords, and colored cloths tied around their heads.

Another witness, the then 15-year-old Mr. Halli (1932) who washed Marine uniforms in exchange for some bread, woke up at night by the noise. „From a kilometer distance I heard the battle starting.”

Veteran Wim Hornman, who witnessed the attack, describes in his memoirs (W. Hornman, The history of the Mariniersbrigade) that women and children joined as well. Another Dutch veteran, Karel Poetiray, told to journalist Herman Keppy in his book Pendek that the Madurese fighters came from everywhere. „They even crawled through the open drains.”According to him this was in favor of the Marines, „because on one side I put my Bar (American machine gun) down and then I could see the smoke on the other side, then I knew the guy was fucked up.”

Veteran Halik: „It was chaos and shootings from all directions.” The whole confrontation only took two hours according to him. The losses on the Indonesian side were huge: corpses littered the square. Later with a bulldozer The Marines dug a big hole on the spot in front of the mosque where the bodies were buried with the forced help of prisoned fighters. Several bodies were first burned before they were buried as we can see at the photos of this article, which were never published before. 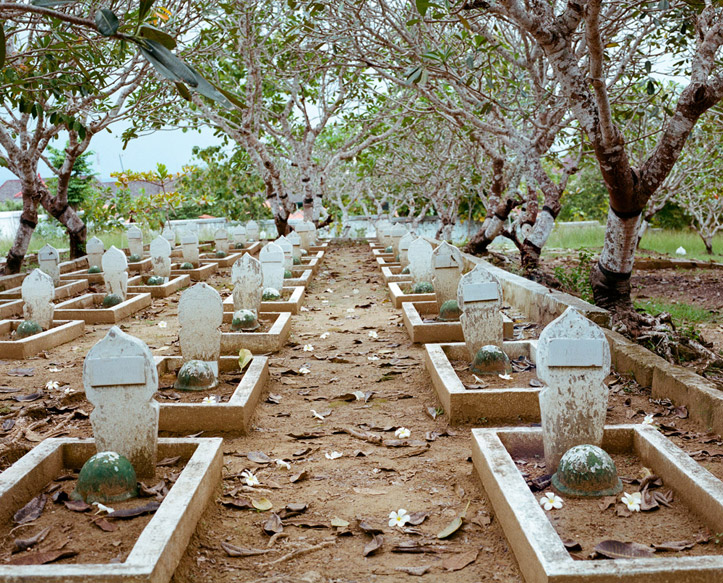 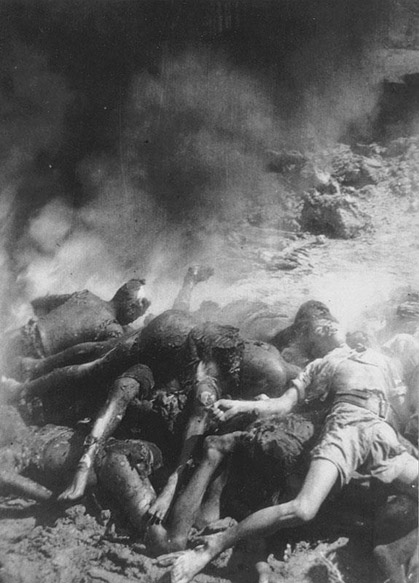 Visit of Prime Minister Rutte to Indonesia
This happening was unknown in The Netherlands till 2008 when the Volkskrant published photographs of the mass grave and in November 2013 when Nieuwsuur-television showed the pictures again in relation to Prime Minister Rutte’s visit to Indonesia. The veteran who owned the photos wanted to show that shocking images about the Indonesian Independence war in the media often give a wrong impression: the Dutch had no choice. „They attacked us with spears, what else can you do?”

But why the Marines were attacked and the circumstances in which this attack took place were never explained. Veteran Hornman says it was a ‘religious delirium’ of Muslims. But according to the Indonesian historian Sulaiman Sadik (1935) this is not correct: the attack was a direct result of the landing of Dutch troops in Madura two weeks before. The landing was part of the First Police Action which the Netherlands began against the young Republic of Indonesia on July 21, 1947, the action was supposed to „protect the Madurese population against the freedom fighters.” But the majority of the population didn’t want that the Dutch returned says historian Sadik.

Documents from the National Archive showing a different motive for the landing: the Marines were ordered „to clear and safe the salt industry as soon as possible.” Herman Burgers, ex-lawyer and former employee at the Court Martial of Batavia confirmed that. „Madura located the largest salt production of Indonesia, a main reason for the occupation. Besides that The Netherlands wanted to create a subordinate federal state of Madura.” Apparently it was urgent because the occupation took place during a cease-fire agreement announced by Army Commander General Spoor after a call of the Security Council of the United Nations on 4 August. However Spoor agreed, in contrary to the official policy, the same day with a landing in Madura and in the following days the Dutch reached the city Pamekasan. According to Sadik the occupation was very violently. For example the town of Sampang was bombed. Sadik who visited family there, had to take shelter with his parents in a cave when the Mustangs, fighter aircrafts from the Dutch Army, flew over. „They were with three.”

Supposed freedom fighters were arrested, put in prison, and even tortured. Marine Poetiray confirms: „when we had a prisoner, we kicked his ass.” Tjakra‘s, Madurese who worked for the Dutch army, apparently unhindered by any authority used a lash. „They easily beat the skin of a prisoner’s body.”

The tragedy got a follow-up in the way of revenge, so-called ‘purges’. Photographer van Pagee heard from several Madurese how the Marines went into the hills in search of remaining fighters, and that they didn’t spare the local civilians.

In a small village in the remote hills of the area Palengaan Van Pagee meets elderly farmer Bpak Masruddin, an ex-freedomfighter. „First the artillery came and bombed everything,” he says. „It was a total surprise, not everyone had time to flee. There were so many civilian casualties, including women and children. ”Also his niece got lost during the attack. „After that the infantry searched all houses and interrogated people.”

Muslim-schools
According toseveral witnessesin the area the Marines especially focused on Muslim schools to arrest hiding freedom fighters.The 85-year-old farmer Suka who lives in another village in the hills still remembers the arrival of the Marines very well. Suka wasn’t interested in politics but like most villagers he took his bamboo spear to defend himself. During a purge his friend was shot to dead. „They were looking for rebellion leader Abdur Rachman and because my friend Carang looked a bit like him, the Marines killed him by mistake.”

Remarkably these purges, which according to veteran Hornman were against ‘large groups of extremists’ started at August 25th. The same day that an international resolution was adopted to call the Dutch to agree with a cease-fire.

Veteran Poetiray classifies the tragedy of 16 August as the biggest he experienced during his four-year service. However, very little information is found in the military records. The Colonel of the Marines only talks about „here and there some local resistance”during the entire period.
Only the Dutch intelligence (NEFIS) wrote that an attack took place, but reports that „only small shootings on Dutch patrols and posts have been reported” followed by some ‘purges’.

According to military historian and oral history specialist Dr. Stef Scagliola (Erasmus University), we cannot determine why there is so little documentation about this. „It may have been lost or deliberately left out, we don’t know.” What this story according to her shows and why this is important is the total absence of the perception of Indonesians in our history. „Because of that emptiness the impression can be made as if their experience was not too bad, or even that it did not happen.”

Documentary photographer Marjolein van Pagee is working on project ‘Kembang Kuning’ and is investigating the actions of the Dutch marines in East Java. On Sunday 17 August (Indonesian Independence Day) her exhibition opens at Galerie Zerp in Rotterdam where she shows portraits and landscapes related to the Indonesian struggle for independence in East Java.
—