Last May, headlines worldwide paid attention to the suicide attacks in Surabaya, Indonesia. In various media outlets I read about the fear of the Western world that ISIS, after being defeated in the Middle East, was moving to Southeast Asia. The new wave of violence in Java was seen as proof. In the latter narrative, it is totally accepted that American and Australian intelligence services provide support in the fight against terrorism. Immediately after the attacks in Surabaya, via the American media channel “CNN Indonesia,” the CIA offered Indonesia to: “dismantle terrorist [networks], including the hunt for the perpetrators and the conspirators behind the terrorist attacks.”

This month the Netherlands Minister of Foreign Affairs Stef Blok also visited Indonesia and literally said: “We stand shoulder to shoulder with you in the international fight against terrorism.” Minister Blok also added a critical note regarding Indonesian human rights violations when he referred to “the situation in Papua.” In the same week Amnesty International Indonesia published a lengthy report about Indonesian violations against Papuans.

Before we interpret this Western assistance as heartfelt sympathy, it is crucial to know the real geopolitical interests that are at stake. Including the history of gold on the remote province of West-Papua, until 1963 the last colonial stronghold of the Netherlands.

It seems that ISIS is not the only danger to the national security of Indonesians. The pirates on the Indonesian (gold) coast are not from the Middle East but rather from Phoenix Arizona, the location of the head quarters of mining company “Freeport McMoRan.” An American multinational that made incredibly huge profits from mining gold on West Papua.

In 2017 however, Indonesian President Joko Widodo (commonly referred to as Jokowi) demanded a bigger stake in the ownership: instead of 9% he wanted 51% of the shares. Last week, after a year of tough negotiations the Western partners finally signed a new non-binding agreement, of which the details are going to be discussed in the next months. Although historically a great achievement, this may not be the end of the story.

In fact the new agreement leaves the US-shares almost entirely in tact, they continue with 49% shares. The UK-Australian owned company Rio Tinto is the big loser as they have to sell their part to the government of Indonesia.

In the old arrangement there used to be four parties with shares in the PT. Freeport Indonesia corporation:

The shares of no. 2 + 3 are now going to be transferred to the Indonesian state mining company Inalum. (Of which 10% will go to the local Papua Provincial Government and Mimika Regency Government.) For the first time in history Indonesia will own the majority shares.

The current tensions in Indonesia go far beyond domestic religious issues, terrorist threats and the feared caliphate. It seems that the real “pirates” only make use of the fear and chaos that ISIS-inspired attacks create. Under the guise of the war against terror Western intelligence services manage to get access to this strategic country. Not only that, one of the Indonesian political figures interested in a Western alliance is Prabowo. The latter draws his popularity from the most militant and radical groups of all: the Indonesian FPI (Islamic Defenders Front). The leader of this group fled a year ago to Saudi Arabia out of fear for persecution. The FPI openly supports IS leader Abu Bakr al-Baghdadi and other al-Qaida branches.

In this power game the Indonesian elections of next year are going to be crucial. The rivalry between the two main political opponents in Indonesia is about international alliances: from emerging China / Russia to the waning power of the United States. It is well known that China has an increasing influence on the region and it is also clear that Washington is concerned about that.

Jokowi’s opponent Prabowo, (not coincidentally the ex-son-in-law of dictator Soeharto who was supported by Western powers in 1965) is openly anti-China and chooses to defend American interests. He has shown himself opportunistic, eager for power and not wary to use violence. For instance, he is been accused of human rights violations in East Timor and West Papua. At the height of the (initially pro-Western) Soeharto-regime, Prabowo joined the army, became general, and after marrying the daughter of Soeharto in 1983 he was part of the centre of power. During the student uprisings in 1998, however, he incited his troops in such a way that this resulted in mass violence in which students were kidnapped and even killed. Besides that many Chinese were victimized. Subsequently Prabowo was fired and forced to leave the army. After that he has been residing in Jordan for some years, settled as a businessman and returned to the Indonesian political arena from 2004 onwards. He lost the presidential elections of 2014 but is going to try again next year.

No doubt that the Western neocolonial masters of this world do not appreciate Jokowi’s current policy. When he in 2017 demanded 51% of the shares, the American Vice President Mike Pence immediately flew to Jakarta to have a word with him. One of the largest shareholders in Freeport and also adviser of Trump, billionaire Carl Icahn, accused Indonesia of “cheating” and said to be insulted that the Indonesians wanted to change the contract, which officially expires in 2021. Prabowo shamelessly stressed that the United States helped Indonesia in the past: “We must respect those [the Americans] who helped us before. Hopefully there is a solution that is beneficial for everyone, the interests of the Republic should be set off against the interests of the investors.”

However, Prabowo is not the only candidate who may be interested in an alignment with the US, willing to provide unlimited access to gold and oil in exchange of political power. Several political key-figures (among others ex-military chief Gatot Nurmantyo who retired last March) visited New York in the past weeks. He was spotted in front of the Trump Tower and also visited an Indonesian Muslim boarding school in New York. Is it just a coincidence that Gatot considers running for president next year?

Given the huge interests that are at stake, it is not unlikely that Washington will do its very best to prevent Jokowi’s reelection, so that he cannot do more “harm” to their enterprises. That is why the non-binding agreement of last week should not be considered a done deal. The question is how this is going to evolve. Besides Freeport the Jokowi administration also plans to nationalize the biggest oil block in Sumatra, operated by Chevron. The contract ends in 2021 and the government already announced it will not be renewed. Western companies repeatedly complained about the increasing protectionist legislation that was implemented under Jokowi’s rule. Interestingly however, this legislation did not prevent a series of non-Western business deals. For example, last year Indonesia and Russia agreed upon a purchase of nineteen Sukhoi fighter jets. Russia allows Indonesia to pay 50% with natural products (coffee, tobacco, palm oil, etc.), something that Western multinationals would never agree upon with their World Bank.

Ironically, before the 1965 coup, several British and American companies were forcibly nationalized as well. Indonesia’s first President Soekarno was the founder of the famous non-alignment movement and as an anti-imperialist he would never have agreed upon the Freeport deal that mostly benefited Western neocolonial interests. Until today it is still commonly unknown that the ’65 regime change had everything to do with gold on Papua. As a result the country suffered for thirty-two years under the dictatorial regime that killed more than a million suspected communists (name lists were provided by the CIA) and jailed many other critical opponents. Combined with the ongoing human rights violations against Papuans, this is the real face of the capitalist greed.

It is like the fight against terrorism just replaced the earlier crusade against communism. That Soekarno had to leave the stage was not because he was a communist, it was because he did not allow his country to be plundered by foreign hands.

However decisive, 1965 is not the year where this story starts. It was 1936 in colonial occupied Indonesia when the Dutch geologist Jean Jacques Dozy discovered the exceptionally high concentration of gold. Together with other valuable oil findings it was deliberately kept secret, afraid as they were of Nazi Germany and Japan, two powers that were already posing a threat in the late 1930s. In 1945 the Indonesian declaration of independence became another ‘obstacle’ to access the mountain of gold. The Dutch New Guinea Petroleum Company (NNPGM) was for 60% in American hands, directly linked to the famous Rockefellers who set up Freeport later. When we take this into account it becomes more understandable that the Netherlands, after having accepted the Indonesian independence in 1949, refused to give up Papua until 1963. They always denied that their interest in Papua had something to do with valuable resources. They justified their claim based on the humanitarian argument that Papuans deserved to be independent because they did not want to be ruled by Jakarta. The Dutch always got away with this because the gold and oil findings were not publicly known. Eventually, their ‘old style’ colonial approach was sidelined by the American ‘new style’ of colonization.

As a result of the secrecy, only a few Dutch and American government officials were aware of the ‘El Dorado’ still to be exploited. Even Soekarno and John F. Kennedy had no idea. It was not until Soeharto (with some help from Washington) came to power, sidelining Soekarno, that Freeport openly started the activities on Papua.

To conclude: let us reflect on what it means when Western intelligence services offer Indonesia assistance in fighting the war on terror. The new Freeport deal may be a milestone from historical perspective; it remains a deal with the devil. Nationalizing Western multinationals has never been without risk.
— 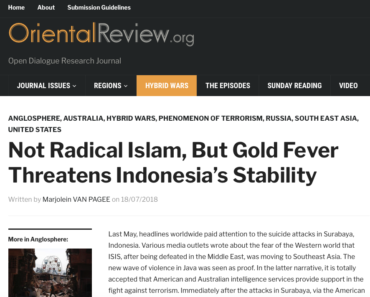