Perpetrator during the Bersiap-period in 1945?

In the Netherlands, talking about the so-called ‘Bersiap-period’ can be tricky. The Bersiap is the period after the Japanese capitulation in which some Indonesians ruthlessly killed Dutch and Eurasians, sometimes including women and children. It is especially tricky when you haven’t experienced this tragedy yourself and when your family has no link to the first days of the Indonesian revolution in the autumn of 1945.

On Saturday May 10th, 2014 The Volkskrant published an article about “perpetrator” Hario Kecik (93). During the fall of 1945 he was one of the commanders of the military police in Surabaya and had a leading role in the resistance against the Allied forces. Mr. Hario speaks six languages ​​including Dutch, and as a former general, intellectual, doctor, painter, Sukarno-loyalist but above all author of many books, he is a colorful character. 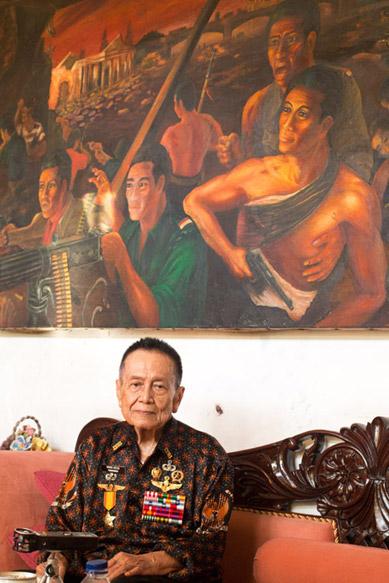 Last January, Dutch correspondent of news channel NOS and Volkskrant, correspondent Michel Maas, asked me whether my contacts in Surabaya could help him find “perpetrators of the Bersiap.” Although I questioned the latter approach, I nevertheless suggested Maas to have a talk with Ady Setyawan, a history expert from Surabaya. We proposed a meeting in Jakarta in late January, but Maas said he didn’t have time. Only in April he sent Ady a message to ask for help. Ady didn’t know how to respond, because, how do you tell a senior journalist that you don’t agree with his simplistic ‘perpetrator-victim approach’? Eventually, Ady shared the video-link of the interview I had with Hario. Ady did certainly not sent him this because Hario is a perpetrator as Michel Maas was looking for, but rather to let him talk to someone who could speak from his own experience and probably explain Maas that it is not that black and white.

Back then I had no idea that the Volkskrant would use him as the only witness. Without contacting us after that, Michel Maas used Mr. Hario as ‘the perpetrator’ that he found.

Maas explains the fact that he could only find one ‘perpetrator,’ (one of which he questions the reliability already in the first paragraph) because ‘they’ (the Indonesians) don’t want to talk. His article about Hario Kecik is combined with another victim-account. The other story is an interview with a victim of the Bersiap, the Eurasian Jan Somers. The latter also witnessed the tumultuous revolution in harbor-city Surabaya. Remarkably, Maas doesn’t question the reliability of Jan Somers. 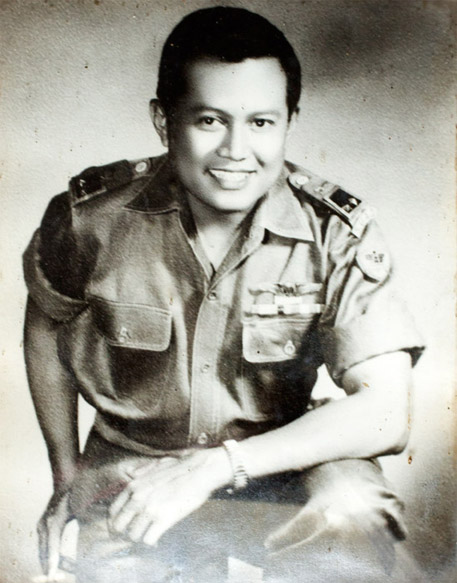 Those who don’t know anything about this particular history, probably think: it’s good that to hear the Indonesian side of the story. But once you have studied the Indonesian history more closely you will understand that the Volkskrant already made a mistake by searching for an Indonesian perpetrator and a Dutch-Indo victim. This fits perfectly in the Dutch propaganda of that time in which Indonesian nationalists like Hario were framed as “perpetrator”, a heartless killer. To some extent justifying the war that followed. As if they believed that the Dutch government had no choice than to take action against violent gangs and terrorists. Although the newspaper is making a distinction between Hario and the village population, important details are missing. I think either Maas should have done more research to find a real ‘perpetrator’ from the kampong people or he should have gave up his first plan and change the problematic frame of ‘perpetrator-victim’.

Once your have broaden your view with Indonesian sources you will know that it’s not that black and white. Dutch propaganda was supported by one-sided reporting in the media. Back then De Volkskrant also made ​​an important contribution and apparently they have not much changed in 2014.

Because I am working for four years on a photo- and interview-project about the Independence war in Indonesia, the Bersiap and the Battle of Surabaya came across my path several times. Until today, this period is severely discussed. Recently the Indonesian violence during Bersiap was even classified as ‘genocide.’ There are Indisch people in the Netherlands who think that the Indonesian government should make official apologies as well. As if the Bersiap is not connected to hundreds years of colonial occupation and wasn’t followed by four years of war in which the Dutch tried to eliminate the Indonesian struggle for freedom. In my opinion, when discussing the Bersiap you cannot see the happenings before and after separately.

In 1945 Hario Kecik was one of the young Indonesians who was armed to defend the new Republic. Because of the Dutch colonial education he received, he saw many of the Dutch (and Indo’s) as his friends. Together with his group, he attacked the so feared Kempetai-building. But no, it was not his aim to murder as much Dutch and Eurasians as he could find, that is an essential difference. His purpose was to withdraw the foreign powers from his hometown: the Japanese, the British and later the Dutch. Hario Kecik : “During Bersiap I didn’t kill any Dutch or Indo.”

The photo-caption in the Volkskrant read: “We attacked trucks which transported women and children. All of them gone.” What is the reason that the newspaper chose this quote? As a Volkskrant reader I would interpret that as if Hario personally killed these women and children. Obviously this is about the Gubeng transport of October 28, 1945 when British militarytransported mainly (Indo-) Dutch women and children and got attacked by a group of Indonesian forces who opened fire. However, Mr. Hario Kecik didn’t witness the confrontation, he talks in general: “We Indonesians.”

End of October 1945 the Surabaya people started the frontal attack after the British ignored agreements. “Almost the whole British division was eliminated in a couple of days” says Hario. But no, he doesn’t mean that he attacked the trucks and murdered the women and children.

After the fighters hit the trucks, an angry crowd of villagers started to attack the defenseless victims with all kind of weapons they got. So actually Michel Maas should have interviewed somebody from the angry crowd, but since he stayed in Jakarta and only spoke Mr. Hario, he turned him to the guilty one.

Moreover, the battle group that opened fire to the truck, which drove in high speed, couldn’t know that there were women and children inside because on the outside it was a British military truck that could be up to anything. That was threatening. Why Michel Maas didn’t mention that there were also Indonesian fighters who tried to prevent the killings and in the chaos tried to help to bring the women and children in safety? the latter information is painfully missing from the Volkskrant article.

When I read about the so-called flag incident the newspaper doesn’t mention the Indonesian deaths that were fallen. Indeed, when I interviewed him, Hario also told me that he believes that Mr. Ploegman is the key figure of causing the violence after that. Hario is convinced that if the Dutch flag was not raised, the anti-Dutch violence wouldn’t have begun. I do not know whether that is a correct analysis or not, personally I think that there was already something brewing.

“No one knew who was in charge in this country,” I read. However in reality, local authorities were installed quite soon after the declaration of independence. Although the new authorities were still inexperienced, they took their new job very seriously. The British troops couldn’t ignore that, and after landing in Surabaya they made some agreements with the local representatives of the young Republic. According to the Indonesians, the British did not respect the agreements which led to the fighting in the streets of Surabaya where a large part of the British division was eliminated and one of their generals was killed. 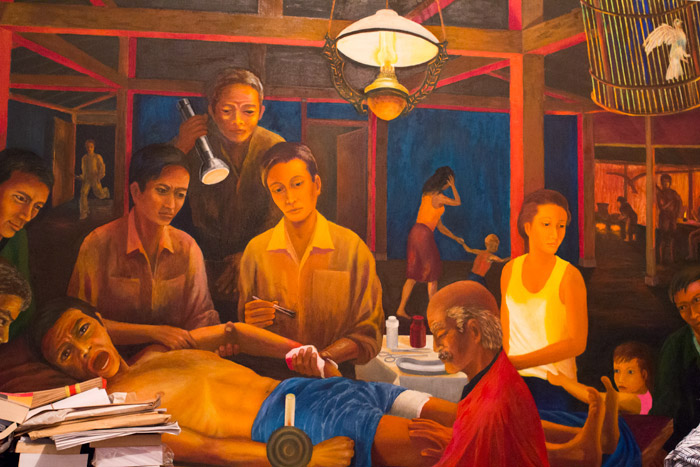 It was clear that a majority of a large group of Indonesians rejected the Dutch rule as it existed before the war. The Dutch East Indies was no more after 1942 when Japanese troops easily defeated the Dutch armed forces. When the Western Allied forces divided Asia and appointed the British to look after Indonesia, this didn’t change anything about the Indonesian proclamation. The question is whether the just liberated Dutch and Indo’s fully understood the new reality.

For the Indonesians it was frightening that they didn’t know exactly what the Allied Forces were up to, it was equally uncertain what the former Dutch occupiers were planning. On Indonesian side the fear was that the Dutch East Indies government would not recognize the Republic and that they would restore the colonial government again.

It’s not about judging nationalities in terms of good and bad. The Indonesian ‘pemuda’ were not holy men but certainly not the murderous criminals as they regularly described by the Dutch. The Japanese left the Indonesians trained and organized armed groups, that’s something different than uncontrolled gangs. The high educated youth knew that the brutal murder of civilian people would not lead to international recognition of the Indonesian Republic. They tried to stop the murders committed by crowds of kampong people (including criminal gangs like Sabaruddin).

Naming an intellectual as Hario as perpetrator shows to me that the Volkskrant doesn’t know where they are talking about. Perhaps the newspaper is still following the propaganda of sixty years ago?

Revolution always cause casualties on both sides. Yet remember: the Indonesian people were victims of hundreds of years of colonialism and not the other way around.
—