Colonial Netherlands was itself a fascist occupier – Trouw

Colonial Netherlands was itself a fascist occupier

On Saturday it will be exactly 400 years ago that Jan Pieterszoon Coen had 47 Bandanese leaders murdered, the culmination of a twenty-year terror campaign by the VOC. The recent attention to the genocide in the Banda Islands (1621) erases the existence of survivors. It is time for the Netherlands to recognize this falsification of history and to do justice to the Bandanese diaspora, says Marjolein van Pagee, founder of the Histori Bersama foundation.

Remembrance Day is behind us again, the annual moment where it is explained to the Dutch people who we, historically, supposedly are. Since the Second World War, national identity has revolved around white victimization by German and Japanese fascism. There emphatically is no mention of the inherently fascist nature of the Dutch colonial project which began more than 400 years ago. Let alone that this is about commemorating victims. In fact, it is precisely the colonial perpetrators who are commemorated on May 4: soldiers, such as my grandfather, who were sent to Indonesia between 1945 and 1949. 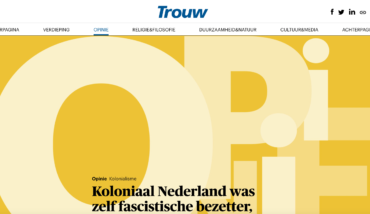 This year again, on May 4, we heard the language that “all civilians killed or perished in Asia” are commemorated. However, the booklet Counting the Dead of the National Committee on 4 and 5 May shows that only those people who enjoyed European status in the colony are counted. The estimated 4 million Indonesians who died during the Japanese occupation and who were regarded by the Netherlands as “colonial subjects” don’t count. And the more than 100,000 Indonesian civilians who died by Dutch terror after 1945 are for sure not mentioned.

In the same year that the Dutch government attacked the independent Republic of Indonesia, the decision was made to nationally commemorate the soldiers killed in the fight against the Germans. It is striking that the organizers did not care about Jewish genocide victims. People like Anne Frank, later hijacked as a national symbol, apparently didn’t matter.

May 4 began with the collective erasure of genocide victims

The start of the national commemoration is characterized by a collective erasing of genocide victims. Even though they were added later, there was no mention again of the erasure itself afterwards. In any case, Remembrance Day didn’t start as a “grassroots initiative” of the people it should be focused on. Even now that Jewish (and Sinti and Roma) victims are mentioned, it is not discussed [this sounds much better than explained, even though you say explained] that most Dutch people did not resist the German occupier at all.

From a world history perspective, the Dutch are not victims but perpetrators, occupiers of other people’s land. Not five years, but 350 years long, the Netherlands pursued a fascist policy against non-white peoples. There are only four days between May 4 Remembrance Day and May 8. Exactly 400 years ago, on May 8, 1621, Jan Pieterszoon Coen had 47 Bandanese leaders murdered, the culmination of a 20-year terror campaign by the VOC.
Why were the Dutch even there, on Banda? In the sixteenth century, the Banda Islands were the center of a well-functioning trade network in nutmeg and mace. This came to an abrupt end when Dutch ships reached the small archipelago in 1599. The Dutch forced the Bandanese to cease trade with other peoples and to supply only to them. Naturally, the islanders opposed this absurd demand, after which the VOC administration decided to forcibly expel them from their land and establish a plantation colony there.

More attention than ever is paid this year to Banda in the form of exhibitions, publications and (online) meetings. The Westfries Museum, for example, is organizing the exhibition Pala – Nutmeg Tales of Banda. The National Maritime Museum has the photo exhibition I love Banda by Isabelle Boon. Furthermore, some Dutch academics have united under the name Banda Working Group. They work with history experts from Indonesia.

However, as with Remembrance Day, these are not initiatives from the communities that were subjected to the suffering. Just as Anne Frank’s identity was “hijacked”, this is happening now to Banda in the same way, through the erasing of the survivors. To emphasize the seriousness of Coen’s deed, historians have often repeated that nearly all islanders perished. This created the impression that there are no Bandanese descendants who can keep telling the story. I too was very surprised when, during the writing my book Banda. The genocide of Jan Pieterszoon Coen (2021), I heard about a Banda diaspora community. Christa Soeters, who in 2016 called Remembrance Day fascist and received a storm of criticism, brought me into contact with three descendants who live in the Netherlands: Ridhwan Ohorella, Lukas Eleuwarin and Marcel Matulessy.

It turns out that, before Coen arrived on Banda with his war fleet, a considerable part of the inhabitants had emigrated in a timely fashion, with their leaders, to other islands. Their departure was a deliberate decision, not an escape, they themselves speak of “migration”. Six hundred Bandanese people settled on the Kei Islands, where their descendants live to this day. They have recorded their long history in writing.

If we in the Netherlands want to pay attention to Banda, let’s start with the recognition that the genocide went hand in hand with a falsification of history. It is high time to do justice to the torchbearers of a community that was supposed to be gone but isn’t.
—