YOU SHOOT ALL TOGETHER

The photo album of Dutch-Indie veteran Han Grijzenhout (85) contains a remarkable, never published photograph: a Dutch tank labeled ‘Lunetten’ crushing a village house. In the next picture we see a happy Grijzenhout dressed in traditional sarong while an Indonesian freedom fighter wears his Dutch uniform. It is precisely the paradox in which the retired psychologist lived for two years as a Marine at the Intelligence Service in East Java. 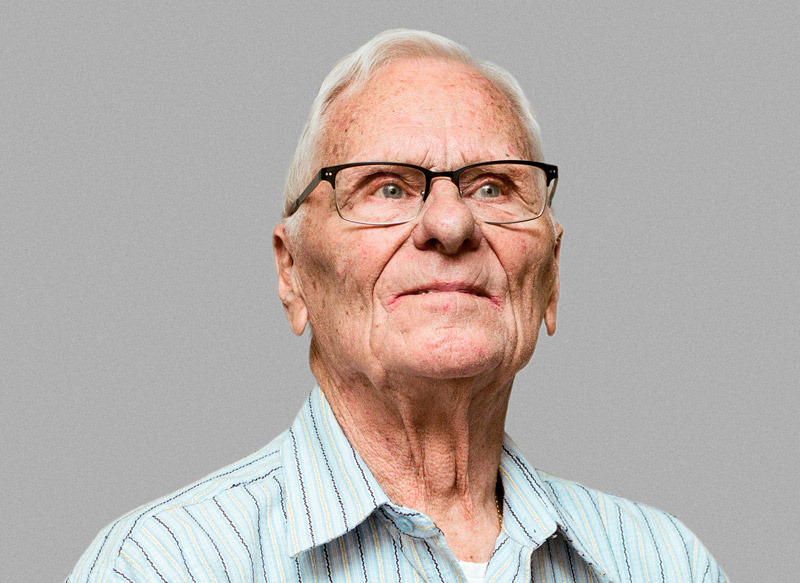 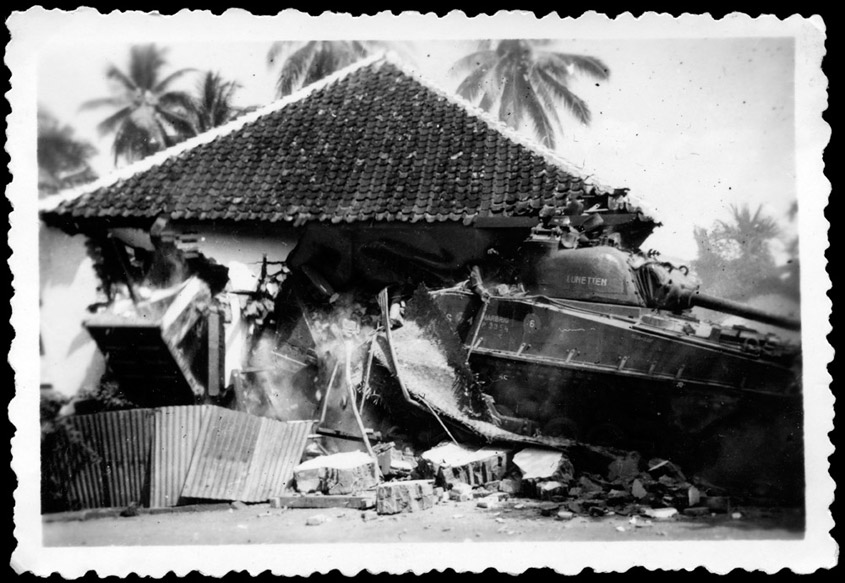 To survive, he had to fight in a war that he saw soon as injustice against people with whom he became friends. Therefore Grijzenhout feels misled by the Dutch government who sent 135,000 troops to the decolonization war in the Dutch East Indies. According to this veteran the Dutch Marines are guilty to war crimes such as torture, shooting at innocent civilians and the needless destruction of villages. The ‘miserable guilt’ makes that he can’t sleep alone after sixty-five years and that he still suffers from severe anxiety from time to time.

According to historians the testimony of Grijzenhout is unique. Never before there was such a outspoken testimony about the activities of the intelligence service of the Marines in East Java (see below). Overall there is very little research done to the intelligence services in the decolonization war. During the trade mission of Prime Minister Rutte to Indonesia, which starts tomorrow, there will be no general excuse: the Prime Minister is of the opinion that “the history went as history goes.”

Grijzenhout: “The Netherlands should indeed apologize and make public the facts. Because we have done terrible things, we cannot soften anything as Dutch. What wrong was, was wrong.”

Shooting at women and children
Born and raised in Amsterdam he ended up as a 19-year-old boy in the intelligence service of the Marines, the Veiligheids Dienst Mariniers Brigade (VDMB).
The Marines were a relatively small unit during the war with 5,000 men next to 70,000 soldiers of the Land army, and 40,000 of the Royal Dutch East Indies Army (KNIL). Grijzenhout himself was not positive about his participation in the war, but his father found it great that his son had to serve ‘under Her Majesty Armor’. Because he excelled in the Indonesian language during his training, Grijzenhout was placed at the Intelligence Service where you had to interrogate prisoners.

When Grijzenhout landed in the summer of 1947 in East Java, the area east of the city of Surabaya was already in the hands of the Marines. Their task was to maintain order. The VDMB assisted this with spying on the Indonesian resistance and interrogating prisoners and informants.
Regularly the Intelligence Service had to patrol the area and also had to attack ‘enemy villages’. “Such a kampong was then half surrounded.” Grijzenhout’s voice and hands begin to tremble and with tears in his eyes he says: “And then you had to shoot on everybody who moved. Even women and children. I still see it in front of me, a mother with a baby on her arm who was running. You did not know who you hit, you shoot all together at the same time from a distance.” The dead were left behind while the houses of the village were put on fire often. I saw a small house of a man who joined the ‘peloppors’ (Indonesian freedom fighters), while his wife was left alone with the children. And then you had to put this house on fire. Awful.” Other times, villages were razed to the ground by tanks, as shown in the picture from his album. Then the Marines were better able to oversee the area. “If I think about it, that house was destroyed while the ‘peloppors’ were still inside.” He starts breathing agitated. “I don’t want to hear more about it now.” This is the guilt which keeps him awake at night.

Prisoners electrocuted
Although this didn’t happen everyday, he also shot at innocent civilians and crushed down villages. “The so-called extremists were people who fought for their freedom. We had nothing to do in Indonesia after the Japanese surrender in 1945. The big mistake I’ve made ​​is that I didn’t refuse military service, I should have never done this, I’ve been better put in jail!” But when he was there, he had no choice, he had to survive. Because also from Indonesian side the attacks didn’t miss their goal: Grijzenhout got a grazing shot in his left hand and got shot in his chest and leg.

The interrogations by the VDMB were not gentle. According to Grijzenhout who was a guard at Bubutan prison in Surabaya, where freedom fighters were imprisoned. “We usually interrogated with two people. You sat down with your bayonet on your lap, if the prisoner refused to answer you had to sting him.” He shudders when he recalls this memory. The prisoners were forced to speak with the use of electricity. “The electricity let their body shake.” Yet Grijzenhout was glad he could secretly give food and drinks to prisoners and that he could talk to them. By doing this he could pay his guilt, he says.

He became friends with freedom fighters such as Anton Manoppo and Bpak Wardi. “They just took me between them, and then we sang the Indonesian anthem!” He sings the song again, he still knows the text completely.

“People who were found guilty by officers during interrogations got executed.” Also, one of the prisoners with which Grijzenhout had become friends ended up in front of the firing squad. Bpak Wardi survived his stay in this horror prison. Grijzenhout visited him later at his kampong. “His family welcomed me, I found that fantastic! Mister, can I borrow your gun, he asked. That’s all right, I said, but then I want your clothes. That’s how we did this remarkable exchange of clothes which you can see on the picture.”

Back in the Netherlands, in 1949, he spent half a year in a psychiatric clinic. “I was unmanageable, I was screaming at night.” When he came out, he always need somebody sleeping with him. It’s ironic that he as a psychologist helped people with trauma’s but never cured himself of his own trauma. When his wife was on a journey lately, he slept during the day and watched TV in the night with all the lights on. “I received four medals for my so called bravery. But since then I’m just a scared man.” 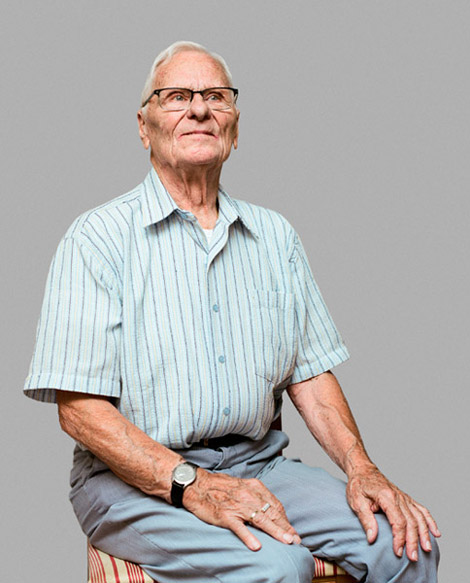