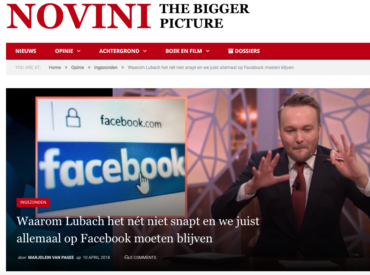 Dutch TV-comedian Lubach in his weekly program ‘Zondag met Lubach’ criticizes the mainstream media but nonetheless follows the mainstream consensus by urging everyone to leave Facebook as soon as possible. He mentioned it quickly: Google is probably worse, but we will talk about that another time. What Lubach seems to forget is that we already reached the point of no return. As long as we do not completely stop using all electronic communication devices like laptops and cell phones, his urgent call is completely useless. In fact, Facebook is also an effective tool that can be used against those in power (of which Facebook as social media platform is part as well).

The whole discussion about fake news (revealing stories that have been totally fabricated and for which Dutch Minister of Internal Affairs Ollongren is warning us) is diverting from what really matters: the flow of one-sided disinformation that is often spread through mainstream media and that convinces us of the Western dominant worldview. Coinciding with the foreign policy of the US and allies. Think of narratives like: Russia is a threat and Putin is a dictator. The rebels fighting against Assad are good and all others are bad.

At first side, it seems there is nothing wrong with Lubach and the Dutch freedom of speech; he previously made fun about Ollongren’s claim that Russian fake news was threatening the media in the Netherlands. However, is it just a coincidence that the producer of his TV-program happens to be the partner of Ollongren? Is this a typical example of ‘controlled opposition’?

A number of critical FB users are constantly challenging these frames. This is presumably becoming too much of a threat to the existing consensus, even for Zuckerberg, who already has 44.6 billion dollars in his pockets anyway. Apart from advertising revenues, this is not about the 80% of the users uploading food- and holiday pictures, this is about the 20% that starts to wake up and questions the dominant narrative. Historically it has never occurred that critical thinkers are united online and reach millions of people through a system of followers. It is probably for that reason that we are now being warned for fake news and social media platforms as Facebook. Perhaps the effect of social media is getting out of hand, uncontrollable. Besides Twitter, there is no other platform that connects so many people from different continents and social backgrounds. Which include the critics of the current world order, of which some are the real ‘watch dogs’ of our democracy. And of course this is not only about sharing information but also the many online discussions and conversations.

Of course Lubach is right that we should not be naive about how the online world works. The scandal of Cambridge-analytics proves that social media platforms are dangerously close to power. However, his call for leaving Facebook is in fact just as naïve as those who have too much confidence in it. Not in the last place because the mainstream media have been encouraging us to leave Facebook already for some weeks now. The point is: you can also use social media as a tool to spread more alternative opinions at the platform that now symbolizes the current American ‘information panic’. Therefore it is more revolutionary to stay on Facebook than leave it.

I don’t think something will change when we all shut down our Facebook-accounts or become more careful in what we post. In that way, Lubach is denying reality, his suggestion is a step back. Let’s not close our eyes to the positive disruptive effect that a tool like Facebook has. It is not without reason that a country as China forbids an American social media platform like Facebook.

Dutch people will probably say that, in contrast to China, we don’t live in an authoritarian state. Indeed journalists can formally write whatever they want without being arrested. However there is nevertheless a dominant consensus about how the world works and precisely that consensus is being questioned on platforms as Facebook and Twitter.

Not to suggest that there is a simplistic conspiracy from ‘them’ against ‘us’, we are dealing with a phenomenon much more complex than that. In fact, the way Western propaganda works was already analysed in 1988 by Edward Herman and Noam Chomsky in ‘Manufacturing Consent’.

Their insights are still relevant in trying to understand the controversy around Facebook today.

Herman and Chomsky observed that despite the free access to enormous amounts of information in the case of the US, the dominant narrative in the press nevertheless remained one-sided. They examined how Western democracy did not necessarily lead to a greater diversity in conflicting opinions. According to them, there was (and is) a very complex propaganda model where the media is ruled by capitalist powers (governments and multi-nationals). They meant that our politicians do not represent the interests of the people but instead represent the interests of large multinationals.

The media theory of Chomsky and Herman is based on five ‘filters’ that determines when a story is considered newsworthy. The first is: the influence of the owner of the news medium, the second is the financial dependency on advertisers who need to be satisfied, the third filter is the problem of selective and dominant sources (think about spokesmen of ministries or multinationals). They called the fourth filter ‘flak’, which is the phenomenon when fundamentally contradictory information or opinions are framed as unreliable or false. You can see this once you start asking critical questions about the fierce anti-Russia tone in the news, you will be directly seen as a propagandist of Putin. Finally, ideologies of fear play a major role as well. During the Cold War this was communism, nowadays it is terrorism or non-Western authoritarian regimes that allegedly threatens our freedom. Geopolitical conflicts (which most of the times are about oil or gas interests) are being justified under the guise of bringing democracy and humanitarian missions.

The working of Western democracy and the relationship with the media is therefore a propaganda category in itself. Of course, at the time Herman and Chomsky developed their theory there was no social media yet, however their insight that the ruling power (of which Facebook is part) is using the media as a tool to influence the masses is also of crucial importance now. For everyone who values ​​democracy and the free press: let’s stay on Facebook and criticize power with the same tools with which they are trying to manipulate us.

Although Facebook and Twitter contain probably 80% nonsense versus 20% relevant information, I refuse to leave those platforms only to prevent mainstream media becoming more dominant. In the end we are all being followed by Google, there is nothing you can do about it. It is not a coincidence that the American Homeland Security office is working on an online database to monitor ‘social media influencers’. Clearly, Facebook and Twitter have become a threat to the mainstream consensus and that is in itself not a bad thing.

My message to Lubach: as long as you keep using your iPhone and Google, shutting down Facebook won’t serve any goal. On the contrary, mainstream media and the power that they represent, will be more influential!
—